“Hubble’s observations suggest that this particular gamma-ray burst was sitting in a very dense environment, right in the middle of a bright galaxy 5 billion light-years away.” 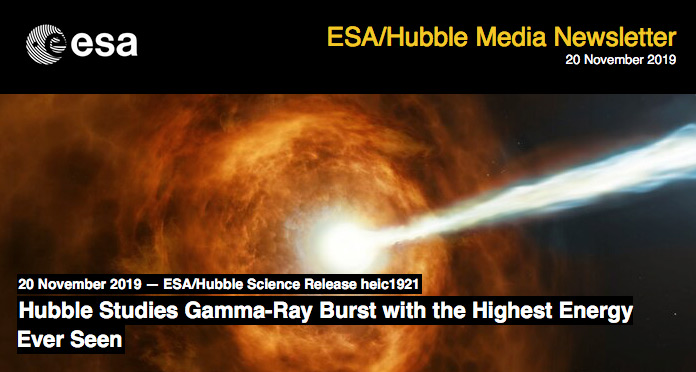 November 21, 2019  Albuquerque, New Mexico – Astronomers and astrophysicists have long known that gamma-ray bursts are the most powerful explosions in our universe. If a star in our arm of the Milky Way galaxy exploded as a gamma-ray burst a few light-years away, it could annihilate all life on the surface of Earth. Scientists have been challenged for a long time to actually observe very-high-energy emissions from gamma-ray-bursts. So in January 2019, when the Hubble Space Telescope and NASA’s Swift and Fermi telescopes, plus the Major Atmospheric Gamma Imaging Cherenkov (MAGIC) telescopes, were aimed at GRB 190114C about 5 billion light-years from Earth, it was astounding when scientists realized the telescopes had captured the “highest energy ever seen” in our cosmos. GRB stands for Gamma-Ray Burst and the explosion was right in the middle of a bright galaxy.

The astounding and unprecedented energy measurement is:  1 Tera electron volt, or  1 TeV.

And the way you say that huge number is:  1 Trillion Volts.

That is one trillion times as much energy per photon as visible light. The Hubble Space Telescope website explains that  “… to achieve this energy, material must be emitted from a collapsing star at 99. 999% the speed of light — forced through the gas around the star at the speed of light that creates the gamma-ray burst itself.”
Here is Hubble Space Telescope brief animation of what that enormous gamma-ray burst might look like.

This intense gamma-ray burst discovered in January 2019, is a breakthrough for physicists trying to understand how matter behaves when it is moving at 99.999% of the speed of light. One of the lead authors of the GRB research is Andrew Levan, Ph.D.,  at the Institute for Mathematics, Astrophysics and Particle Physics at Radboud University in The Netherlands. He said, “Hubble’s observations suggest that this particular gamma-ray burst was sitting in a very dense environment, right in the middle of a bright galaxy 5 billion light-years away. This is really unusual and suggests that might be why it produced this exceptionally powerful light.”

So, the density of matter at the center of the bright galaxy might have increased the interactions with the gamma-ray burst energy, increasing its power. Now physicists hope that studying the data from this unprecedented energy from this gamma-ray burst will help them understand more about matter to light transitions and interactions.